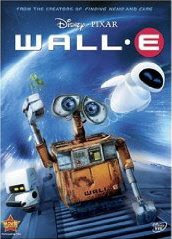 By Disney and Pixar
The highly acclaimed director of Finding Nemo and the creative storytellers behind Cars and Ratatouille transport you to a galaxy not so far away for a new cosmic comedy adventure about a determined robot named WALL-E.
After hundreds of lonely years of doing what he was built for, the curious and lovable WALL-E discovers a new purpose in life when he meets a sleek search robot named EVE. Join them and a hilarious cast of characters on a fantastic journey across the universe. Rated G.
DVD
Posted by TheBeth at 7:07 PM No comments:

By Disney
Full of daring action and hilarious characters, the fun-filled Mulan celebrates honor, courage and the importance of family.  The Washington Post proclaims Disney's Mulan is "gorgeously animated... stirringly told!"
Clever Mulan proves her worth outside her tradition-bound society when, disguised as a male soldier, "Ping," she bravely takes her father's place in the Imperial Army.  Helped by her outrageously funny guardian gragon Mushu and a lucky cricket named Cri-Kee, Mulan strives to earn the respect of her fellow warriors and their courageous Captain Shang.  Mulan's adventures lead to a climactic battle atop the Imperial Palace, where her family's honor and the fate of the Emperor and all of China rest in her hands!  Rated G.
DVD
Posted by TheBeth at 7:00 PM No comments:

By Mitsuba Takanashi
All that matters to 15-year-old Nobara Sumiyoshi is volleyball - she's an awesome player with big-time ambitions.  But sometimes it seems like a girl just can't get a break in the competitive world of high school volleyball.
Although Yushin told Nobara he likes her, he doesn't want to start dating until after the Spring Tournament is over - and he wants to keep their relationship a secret!  Nobara agreed to Yushin's terms, but can she hold up under Haibuki's charm?
book, manga
Posted by TheBeth at 6:53 PM No comments:

By Bill Kelly and Kevin Lima
A fairy tale comes to life in this thoroughly original, new Disney classic.  Drawing inspiration from its classic heritage, Disney creates an inspired story unlike any you've experienced before.  Filled with exiement, fun and incredible music from the legendary Alan Menken, Enchanted is the ultimate fish-out-of-water adventure.  For princess-to-be Giselle, life is a fairy tale - until she's banished from the animated land of Andalasia and thrust into the very nmagical, live-action world of modern-day Manhattan.  When a cynical, no-nonsense divorce lawyer comes to her aid, little does he realize this joyful, wide-eyeed innocent is about to enchant him.  Enchanted - the musical comedy that will have your entire family under its spell.  Rated PG for some scary images and mild innuendo.
DVD, fantasy
Posted by TheBeth at 6:47 PM No comments: